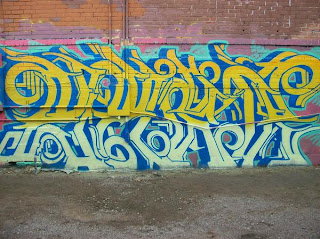 Recently I was interviewed by Lynx News Arizona, a publication out of Paradise Valley Community College.

I forget how much interviews have to be edited and cut short sometimes.
Im going to leave the link here, but Im also going to add the questions and answers that I wish had been published.

The extended interview that didnt get published:

LYNX NEWS- What is graffiti to you?

BREZ-Graffiti has so many different levels that balance it out. From
ugly to the beautiful, depending on the audience and how they filter it. Graffiti is creativity, but it is also a tool to express a deeper emotion and connection to the universe. Human beings all over the world have been doing creative expression since the first signs of human consciousness. Somewhere it is encoded in our DNA to want to draw or scribble or leave behind something to say that we are here, we exist or are existing now.
It will always be the last frontier for visual expression. It is like an untamed and wild animal.

LYNX NEWS-Do you appreciate all graffiti?

BREZ-I do appreciate all forms of graffiti because I believe there is a time and place for everything, and I think that society needs the balance of beauty and chaos. I have experienced so many positive and negative experiences from graffiti but it has helped mold me into the person I am today. I know the extreme passion and dedication that gets put into risking one’s life and freedom to express their soul on a different level than most. What it boils down to is true freedom as a creative being existing in the universe.

LYNX NEWS- What is your favorite medium for creating your art?

BREZ- Right now I am getting use to acrylics again. I do work in several mediums and mixed media as well. But my preference is Aerosol and creating large scale mural works.

LYNX NEWS- How do you feel about the fact that for the most part, aside from walls dedicated to the art, graffiti is considered a crime?

BREZ-It’s interesting that we apparently live in the land of “free”, and that the 1st amendment is “freedom of speech”, yet coming from my view point as a Native American, and knowing that this country was built on the blood of my ancestors, calling my people savages and Neanderthals for living in a certain union with the earth and environment, then trying to eradicate cultures and languages through genocide. Their justice system is going to charge a person with a Felony for PAINTING, while far more severe crimes are being committed and people are getting away with them? I look at it as, my people didn’t ask for any of this especially the current justice system, nor do people in our modern society ask for certain walls and building structures to be built in their neighborhoods, those walls and structures are built based on corporate and governing systems, not the people. So its fucking retarded that those who wish to control society the way want, charge people with criminal damage for doing a natural human thing that is as old as time. That's where the frontline to our battle lies. The true fight for freedom, the fight to exist. Remember the old saying, when someone points the finger at someone else, they don’t realize that they have 3 fingers pointing back at themselves. "Our Existance IS our Resistance."


LYNX NEWS- Do you feel that graffiti has recently become more widely accepted? why or why not?

BREZ- Graffiti Art is definitely becoming a lot more popular and appealing to the newer generations all over the world. In other countries it is accepted a lot more than it is in the U.S. I’ve taught middle school art programs for the Scottsdale Center for the Performing Arts, and I found out that a good majority of my students appreciated and are fascinated by Graffiti and Aerosol Art. Those are the kids who in 15 or 20 years will be doctors and lawyers, and will be buying and collecting high end graffiti inspired art to hang on their walls.

LYNX NEWS- What style of graff art most appeals to you? explain?

BREZ-That’s a hard question because I have love for all styles, because at one point in time I’ve experimented with a wide range of style and technique and have been influenced by so many different artists in one way or another. It’s the same as asking what my favorite color is, there is no such thing really. I love it all. Diversity is what makes the world and walls beautiful in my eyes.
Posted by Be-One at 10:35 PM