Conversations come up with other artists and art lovers about who inspires or influences the work I do today. Many times during discussions about famous or influential artists, many people will automatically say Da Vinci or Michaelangelo for the classic renaissance reference, or Dali (surrealism), M.C. Escher, and or Keith Haring, Basquiat, etc for the "graffiti" artist era from the 80's. These are some of the more famous artists in recent years with the exception of Da Vinci and Michaelangelo.
I don't knock people for whom they choose to like, and I can appreciate all of the names I just mentioned above.......But it doesn't mean I like their work. As a matter of fact, I dislike the term "master painter" thats associated with Leonardo Da Vinci and Michaelangelo. I dislike the term because its giving the title of "master painter" to a a selected group or style of painting that automatically cuts out all other styles of art around the world, most of which have been around far longer than that traditional renaissance style. Why are they the master artists? What about the Egyptians or Mayans? Or any Indigenous culture that has been creating something out of nothing for centuries. On to the next artist. I find most of M.C. Escher's work boring. Haring and Basquiat's work were far from the true expression rebellion known as "graffiti" that was truly living and thriving on the subway trains and in and around NYC in the 70s and 80s. For the record I cant stand Basquiat's artwork.

For me, my personal influences have come mainly from people that I have actually known in my life, other painters and graffiti writers. Like I said, I can appreciate well known artists, and there are a few that I could say who's work I genuinely do like and may have had an influence on me.
But to actually interact with artists who are my peers and who Ive known, painted, laughed, cried, argued, ate dinner, shared a drink and just plain out discussed life with...is the most important interaction and influence I could ever experience and attain.
Ive had influences in my life who were my friends....some who stopped and gave up their talent, others who chose a different medium, some who've actually "made" it, and even a couple who've passed on or ended up behind bars.
In the last year I lost a very close friend Mike Carter aka "Base", who was a huge influence on me when I was first starting out doing graf in the early to mid 90's. When he died, apart of me died inside. But Ive kept his memory and legacy going on by continuing to make art, and to make it to the best of my ability, which is one thing I learned from him.
Another close friend, who was also good friends with Base, and who I actually met at the same time is Ishmael. Ishmael and I have remained close after 16 years, and Im thankful he is still here, and that he is still making art. Both him and Mike influenced me so heavily that it was the fire I needed to want to become a better artist.
Today I have many close peers and friends who have been there along the way to influence my work in some way shape or form. Lalo Cota who Ive known for over 10yrs... and who ive been working a lot with in the last couple years. Douglas Miles Ive known for quite sometime as well, has been a heavy influence in a lot of ways other than actual style or medium.
Other people who have come along in my path are very talented individuals such as Mando Rascon, Miles "Mac" MacGregor, Noe "Such" Baez, Oscar Page, Adrian Dominic, Mike 360, Matt Dickson, Pablo Luna, Tato Caraveo, Adam Dumperfoo, Josh Rhodes, Adam Closer Wenger, Banding Hendrix, Tariq Sabur, and a whole lot more.
With such good people and talent around, the inspiration is always there. Seeing artists at different levels and hearing thought process and personal philosophies about numerous subjects is great knowledge shared.
I'm thankful for the path that Ive chosen, and Im also thankful for the experience that Graffiti has gave me, not all good either, but even the bad times I would never take back. Its molded me and helped provide a hard exterior. Any graffiti artist/ writer will tell that graf...is the real art school....school of hard knocks.
To add to this blog Ive posted photos of recent motivation from a studio visit with Miles Macgregor better known as El Mac. About 2 weeks ago, Lalo and myself stopped by to get a sneak preview of the work at Mac's studio before he sent his new work out to NY for an art opening. 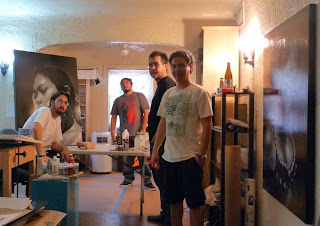 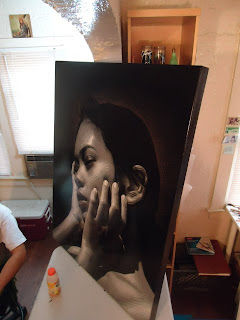 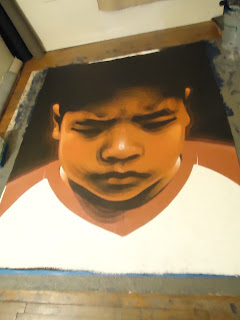 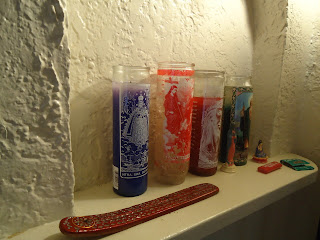 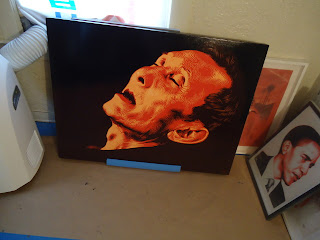 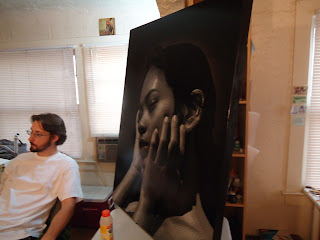 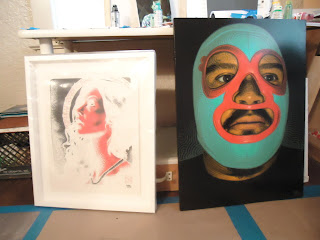