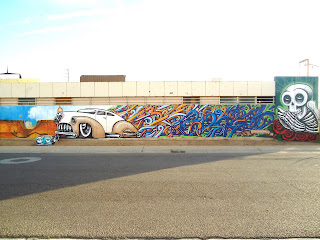 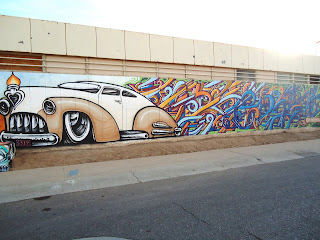 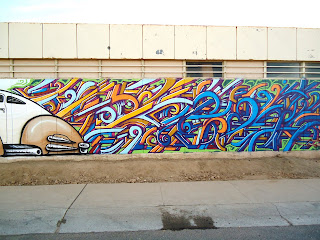 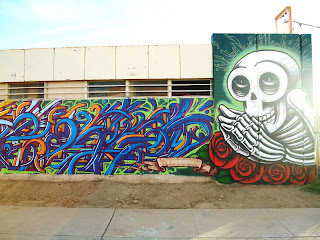 A walk down this street off of Oak or anywhere from Indian School to about....shit at least Mohave and farther(which is about 5miles down the road going south), you'll find yourself immersed in a rich community. I dont mean rich by monetary standards or fancy buildings and your typical boring Starbucks/Borders/PeiWei bullshit strip mall. Im talking rich in culture, history and diversity.

Like any neighborhood in any city around the world, there are ups and down on this street. There are tags and scrawls by local neighborhood kids all up and down the street. You got families and people of all ethnicities who have been in the area for years, and some who came just in recent years. You'll see Paletas, tire shops, 99cent stores, little restaurants that sell delicious Tortas, Carne Asada burros, and bomb buck 50 happy hour tacos... Kids coming and going to school. Regular blue collar workers. Users and abusers. Homeboys. Panhandlers. Cars with rims and loud stereo systems. There is the occasional liberated homeless guy who can be seen walking by with a 40oz at the end of the day, which he probably copped after doing what little odd job he could find that day that probably paid him just enough to get something to eat and a beer.

People are working, hustling, living and just plain surviving the daily grind that we all go through. And at least 50percent of all the business signs are in Spanish and even a few in other languages... 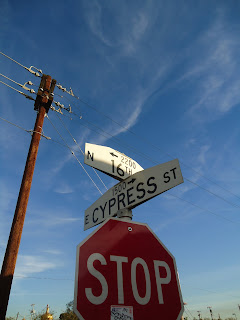 Being born and raised in Phoenix, I have many memories of 16th street because I basically grew up on it. There are several landmarks, from the Phoenix Indian Hospital, to the Lucky Cue on Mcdowell, even down to the no longer existing original Food City on Mojave, not far from the once "Golden Gate" barrio which no longer exists because of development from the airport. You also have Eastlake park on Jefferson. Ranch Market on Roosevelt(which just opened up in the past few years). Moe Allen Auto Body Shop near Osborn. Hell, even the Phoenix House of Karate near Palm Ln...Im amused and amazed at the same time because its still around after all these years.

My Stepdad tells stories about growing up in the Duppa Villa Projects back in the 60's and 70's. And even my real father spent his last days living near the same neighborhood which borders 16th. I myself went to school just north of the Phoenix Indian Hospital at Madison Park Elementary on Campbell.

In the last 6months, a genuine group of locals who run Barrio Cafe, just off of Thomas rd, have spearheaded a project called the "Calle 16 Mural Project". The idea for the project is to get as many walls as possible painted by local artists, community members and activists etc etc. A big push for the project was not only to inspire and rejuvenate the area between Thomas and Mcdowell(for starters anyway)with artwork, but also out of response to the whole SB1070 controversy, which if you've been paying attention, I do not have to explain anything about.

Lalo and I have been busy with several projects individually and collaboratively. This was one that we were not going to say no to. Steve Helffrich runs an artist workspace on Cypress and 16th st called the "bee's knee's". A mutual friend and artist, Chadwick, had recommended myself to Steve, and I automatically brought in Lalo. We initially discussed painting the mural back in October. It wasnt until this past first friday in December that both Lalo and I had time to donate and the same schedule to link up and Collaborate once more.

We pretty much spent 3 to 4 hours a day on it for 7days. For that week, we got familiar not only with Steve, but with other locals from the neighborhood on Cypress.
Everyday we had mothers walking their kids by the mural. Random people pulling off 16th just to stop and admire the work, in some cases almost causing an accident once or twice. We got to know "Rudy" who lives behind the bee's knee's in a make shift corner in the alley with nothing more than the clothes on his back and a blanket.
The last day we met "Tweety". Tweety isnt very tall, has a thin build, probably mid 40s with jail house tats to the sleeves. A homie who spent 16yrs in the pen, and is now just doing the best he can day to day by working under the table for the tire shop across the street, as well as doing other random odd jobs up and down 16th. He shared with us that he learned to draw portraits while doing time. Although he expressed "I wasted a big chunk of my life away, thats why I aint tryin to fuck up now and just do me". Lalo and I both shared with him that at the very least he was able to attain a passion for art and encouraging him to keep up with it.
He showed his love for it as he stood and watched for a good half hour with nothing but good things to say about our work.

Everyone from the neighborhood that walked or drove by, expressed how much they loved the new mural, and how they hope to see a lot more.

With so much history on this street and with so much personal meaning to myself and my own experiences growing up seeing 16th change and evolve, I couldnt think of another wall or location in the city I would rather do work in. Im looking foward to doing much more with Lalo and others in the future.

At days end...No amount of money can compare to the satisfaction of doing a good job, especially when the people who your painting it for, genuinely appreciate it and embrace it as a new chapter in their daily lives on 16th street..... 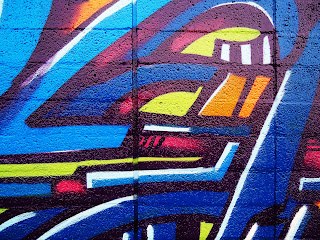