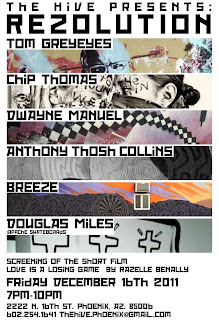 Rezolution came about kinda last minute...My friends Steve and Julia at The Hive on 16th st gave me use of the space for December earlier this year, but 2 months ago asked if I would be willing to show with Chip Thomas also known as Jetsonorama.
Chip is a Doctor up in Shonto, Az... a super down to earth dude, Ive been following his work for the last year or so. I was open to the idea, so that sort of steered me into the curating direction of bringing in 5 other talented Artists...Doug Miles, Tom Greyeyes, Dwayne Manuel, Anthony Thosh Collins, and Razelle Benally.

I wanted the theme to reflect what we've come to call "Rez Life". So I chose artists who are not only prolific but can relate to the context of Rez Life. Its also a play on finding Resolutions to the problems of everyday rez life as well as the stereotypes Native People still get portrayed as from outsiders. 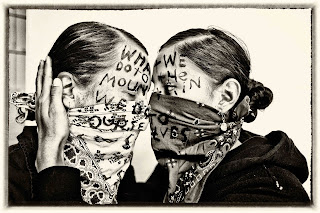 R E Z O L U T I O N
7 Artists will converge upon The Hive art space in Phoenix, Arizona on December 16th 2011 for the group show titled Rezolution (Resolution).
Rezolution (spelled with a Z instead of an S), is a focus on 7 artists who have experienced Native American Reservation life first hand and know the historical as well as the daily modern struggles, triumphs, smiles and cries better than anyone else in the so called American Dream Land. A popular term amongst Native people refers to these communities and land areas simply as “The Rez”.
Douglas Miles is an Apache artist from the San Carlos Apache Nation although he has already been recognized internationally and nationally for the last decade and more, Miles has recently gained the attention of the southern California gallery and street style art scenes. Miles brings stark depictions of strength with his stencils and illustrations of contemporary Apache women and warriors, while incorporating elaborate hand written typography that is heavily influenced by inner city “Cholo” writing which has its origins in Los Angeles.
Chip Thomas, a doctor on the Dine(Navajo) Reservation for the last 24 yrs, has recently taken inspiration from international street artists like Blu, JR, Os Gemeos, Gaia, and others by starting his own series of giant wheat paste murals from images that he has photographed and documented since first moving to Shonto, Az in 1987. Although not Navajo himself, Chip has seen a lot of love and support from his community of Shonto Arizona, as well as heavy outside criticism.
In addition to Doug and Chip: Anthony “Thosh” Collins (Photographer), Razelle Benally (Film Maker), Dwayne Manuel (Painter), Tom Greyeyes (Painter) and local Phx muralist Breeze will be participating. All 7 artists know what it means to live on a “Rez”, and have taken their experiences of everyday life, cultural identities and harnessed them into positive creativity through contemporary Photography, Film, Brush Painting, Charcoal, Graffiti Art, Propaganda, Stencils, Wheat Paste, Spray Paint, and more.
In many ways, the tool known as Art is now a modern warrior’s weapon and resource in being a voice for the at times seemingly forgotten original inhabitants. Rezolution is a platform to exhibit various styles and educate the unaware and unknowing populations about contemporary Native life, art work and the missions to break stereotypes and presumptions of what mainstream society portrays and exploits the American Indian as.
The imagery in this show will be truthful, abstract, blunt, surrealistic and ironically foreign to many eyes looking in from the outside.

-Thomas Breeze Marcus
Posted by Be-One at 8:52 AM

Email ThisBlogThis!Share to TwitterShare to FacebookShare to Pinterest
Labels: REZOLUTION 12/16/11