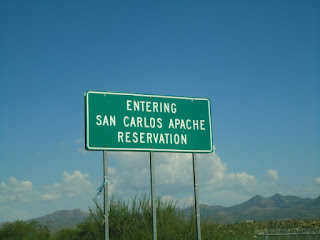 Recently my long time friend Douglas Miles of Apache Skateboards brought up the idea that we should collaborate on a wall mural in San Carlos Az. (on the Apache Reservation). Along with Thomas Greyeyes and Doug… the 3 of us came up with a mural concept which each us would travel to each other’s communities/reservations etc…and create a collaborative piece of art in each of those areas. On this trip to SC, mutual friend, artist and all around good dude, Colton Brock joined the mix on the walls of the San Carlos Skate Park. 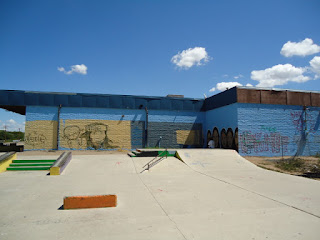 Upon arriving into San Carlos, one of the first things you notice is a Skate Park on the right hand side that is next to a community center. This would be our canvas for the next couple of warm sunny days. Less than an hour into starting on the first day, Tribal Police pull up and give us a hard time. With a bit of misunderstanding we had to postpone working on the wall for a couple hours. In the end we worked it out and were back to painting. 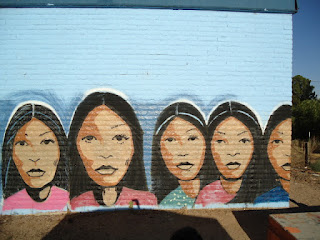 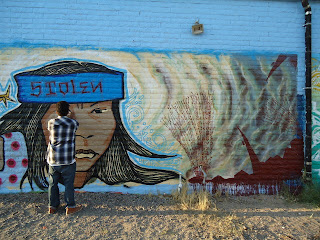 Doug Miles created a life size illustration with Colton creating a background based on the surrounding environment…such as the flat volcanic mesa tops, electrical poles and large amounts of bamboo bushes that seem to be everywhere. Of course the bamboo is not indigenous to the land, but today is a noticeable image around the community. 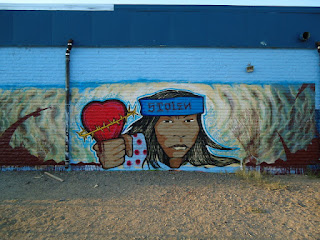 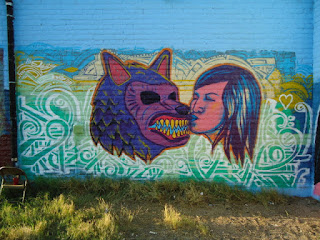 Tom Greyeyes produced a piece based off a photo of his girlfriend Grace kissing a sort of Halloween looking mask of a wolf. I can’t remember but I believe Tom is actually wearing the mask. My contribution to Doug and Colton’s piece was more decorative, and with Tom’s piece it was background and an interesting co-lab at that. I look forward to more. 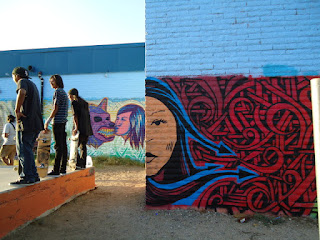 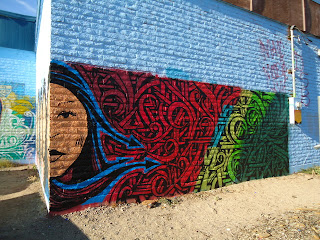 In the end, countless paint cans were empted, gallons of water consumed with an equal of amount of sweat poured out. Young skateboarders who frequent the park, sat and watched while taking breaks from their own craft. Food shared, stories exchanged, honks from people passing by.

“I think this piece is not what people are used to seeing. Its ‘odd’…but this makes it good. It’s outside of Phx to so people look at it different..” -Douglas Miles

For me personally, San Carlos is familiar in more ways than one. I have memories as a kid of traveling to SC for sunrise ceremonies with my uncles. My stepdad who raised me is from San Carlos, and (his mother) my grandmother Cherry taught me a lot about Apache people as a child. SC holds many hints of similarities to that of my own communities of Salt River, Gila River and Sells Az. SC can be a difficult place to live, but its home for many, and I get that feeling of home and can relate even though I'm not from there. The community itself has its ups and downs. I know these struggles and triumphs very well, and I am thankful for being raised the way I have. Not everyone can comprehend what it’s like to live on a Reservation in the United States. Regardless, San Carlos is a place of people with a long history and legacy... its also a place of everyday people living and surviving with many stories to tell. The walls of the park are just a couple stories translated in paint.