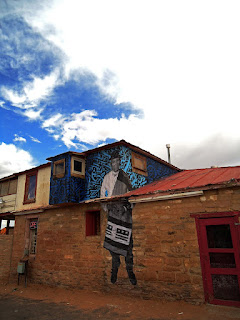 If you're not familiar with Jetsonorama, he is a wheat paste artist based out of Shonto, Arizona on the Navajo Reservation. I collaborated with him on a billboard project here in Phoenix back in November. We also displayed work together at the show titled "Rezolution" which took place at The Hive, right below the billboard piece.

Recently Jetsonorama organized a project called "The Painted Desert Project". Here is a brief description from the project's fb page "The Painted Desert Project seeks to bring a diverse array of dynamic street art by artists from all over the world to roadside structures in western agency of the Navajo nation." The painted desert project has had heavy support from people such as the residents and businesses of the Navajo Nation(from Cameron to Kayenta and more), as well as people such as photographers Martha Cooper and Henry Chalfant. Participating street artists from all over also include Thomas Greyeyes (Arizona),Labrona (Montreal), Gaia (Baltimore), Overunder (Nevada), and Doodles(Washington) with more to come.

These are some shots of Red Lake trading post in Tonalea, Arizona where I worked on a collaboration. Jetsonorama put up the image of a man who was known as "King" Fowler. King is one of the few remaining Navajo Code Talkers from WWII. Myself being raised heavily on respecting one's elders(no matter what tribe) and honoring our warriors(veterans etc)..I was extremely honored to participate in the tribute to this man as well as to bring art to the community of Tonalea, which is a beautiful area along with good hearted people. I felt right at home as if I were on my own tribal community lands. 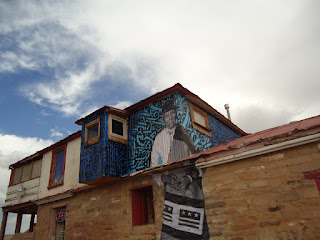 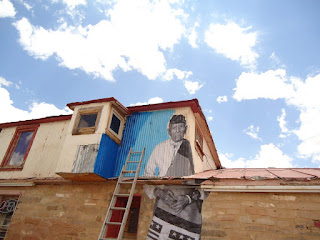 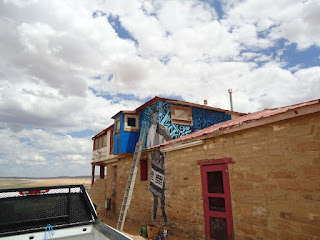 As I was working my way up and down the ladder, I was surprised how busy this place was. Built in 1884, the Red Lake trading post has stood the test of time both business wise and structurally. The man who runs it now is named Lorenzo, and is actually the nephew of King Fowler(the man in the wheat paste image). 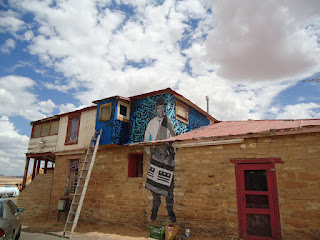 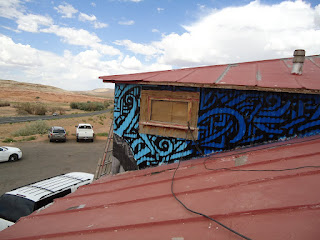 Before my trip up to the Northern Navajo reservation, I had only been to the southern and eastern parts of the land. This trip reminded why I love places that are isolated and away from all the chaos and bullshit that pecks away at our being when we are immersed into large metropolis cities and or are constantly being bombarded with society's hick ups and confrontations. I also recognize the hardships these people go through, as well as the efforts to fight and protect the land and culture... hell even just the right to exist as human beings.