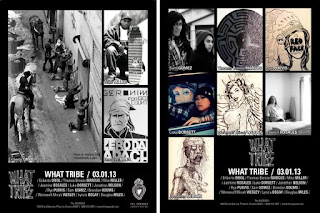 The WHAT TRIBE Art show was born out of necessity. It appallingly begins with a barrage of stereotypes that are aimed at Native Americans. Whether Victoria's Secret hyper-sexualized headdress wearing Kloss super model or Gwen StefanI & No Doubt's red face rock & roll fantasy ( send up of The Lone Ranger ), or the Disney Lone Ranger film (Coming Soon) which features Johnny Depp (in Red face make-up) as archaic racially archetypical "side-kick". Pop culture is now rife with stereotype(s) and caricatures of Native People. The more we critique it, the more it seems to rear its institutionally racist head.

When Douglas Miles was asked to do a show at Denver University with the Native American Student Alliance, the What Tribe art show idea was launched. At DU, Native students were already battling racist Sorority parties. Douglas Miles of Apache Skateboards realized then that there is a whole generation that does not know what is or isn't racist and stereotypical imagery. He saw the need for a creative dialogue to occur. He decided it was important to create and curate an art show where artists could discuss the issue of "stereotypes" in their work. As the show was being curated artists were selected for the conversational power and or social commentary in their work.

From the L.A. Modern iconic work of Eriberto Oriol to the documentation of the history Of West Coast Hip Hop via Mike Miller's photography, to the Downtown Phoenix grit of Sam Gomez's photographic work, What Tribe is a complex eclectic mix of artists from various "tribal" backgrounds and cultures. From the streets of L.A. To the back roads of San Carlos Apacheria, institutional racism affects all people of All backgrounds. The What Tribe show is the place to start the conversation on how to replace ridicule with respect via art.

Existence and Resistance Group Show at The Hive also during Art Detour 25 and Heard Market weekend. 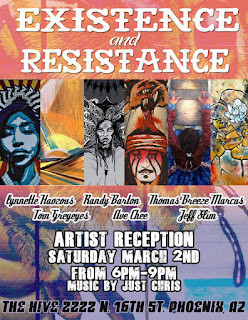 The show titled EXISTENCE AND RESISTANCE featuring the work of Lynnette Haozous, Randy Barton, Tom Greyeyes and Thomas Breeze Marcus, opened at The Hive on Friday Feb 15th and will run through the second week of March. Saturday evening March 2nd The Hive will host a reception for all artists involved as well as family, friends and out of town visitors in town for The Heard Museum Art Market, as well as the Art Detour weekend. Existence and Resistance is also pleased to welcome the late addition to two talented artists Averian Chee and Jeff Slim. The show features a newer generation of Indigenous artists, and their interpretation of existing and resisting in a modern world with acknowledgement to various topics. As in all art, some interpretations are direct and others are found in metaphor and poetics. Come view the work and join us Saturday evening March 2nd. 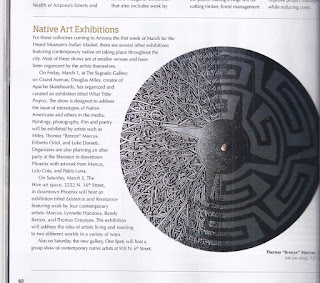 Wa:k is apart of the Tohono O'odham Nation just south of Tucson. Its also known as San Xavier, where the old spanish mission is located. A couple weeks ago myself and others did some painting for the Unity Run Benefit which was a first annual for a benefit to be held in Wa:k for the run.. 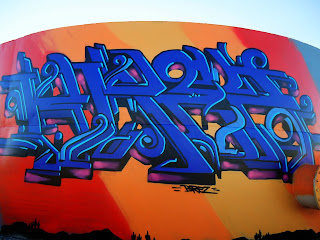 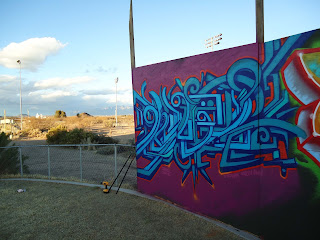 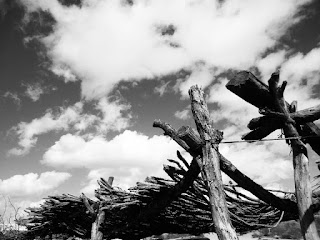 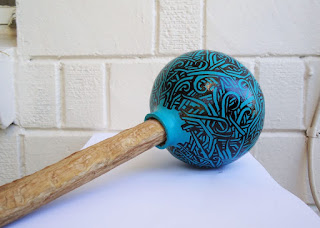 Shav Ka custom for a young O'odham man about to graduate HS. 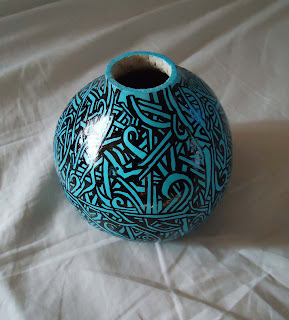 A similar piece to the one right above. Unfinished as a complete gourd, but made a good vase piece for someone. 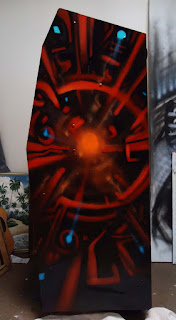 Gyruss 2013. From the Artcade exhibit. 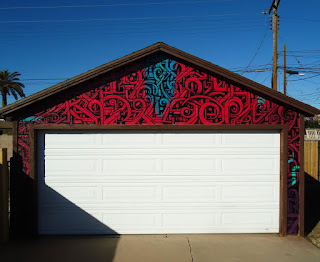 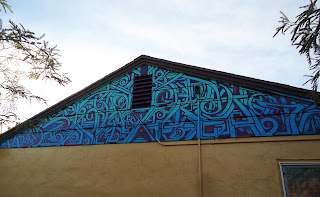 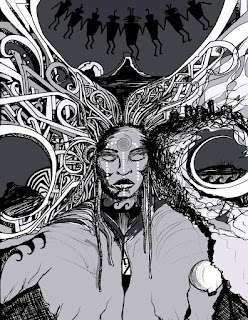 Dreamscape. A recent drawing that woke me up one morning. Images thrown down on paper and slightly tweeked in digital format. A long time family friend and elder wrote something about this that hits it pretty close.

"Woman of the earth, Etoi above, humanity holding hands in support of life, the man in the maze all, your contemporary Ponca/Tohono Od'ham style juxtaposed in both traditional and modern expressions" - Sergio Maldanado