"Mothers arms stretched ..as her fire red tears fell..our feet bloody and sore...Today we rake the cycles of sorrow..Recreating on top of burnt pages..Resisting from past..In order to present Tomorrow..." 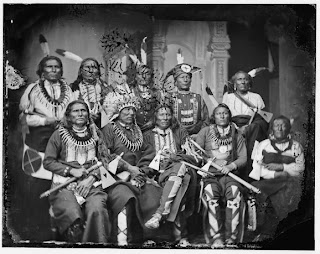 The Installation: The tree represents mother earth crying as her (native) children walked by force, feet bloody and sore by long journeys, with blood painting the leaves and ground.. Fast forward to present day, As survivors of our ancestors, we rake or sweep up the mess made and forced upon us...still making our own history and carrying on a legacy on top of burnt pages of a dark history...we resist and remember...its been apart of us....we should not exist...and by our very survival...our existence is our resistance. 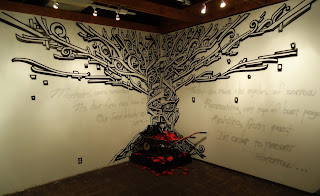 This is a tribute to those tribes who experienced forced removal and walked their own "trail of tears". One of the more well known trail of tears was the removal of the Cherokee, Seminole, Choctaw, and Muskogee Creek from the southern United States. Many tribes experienced a trail of tears as a result of numerous Government actions and land deals and treaties that were never honored by the U.S. during the 1800's. One of my tribes, The Ponca, were forced to leave their original homelands of north eastern Nebraska and parts of South Dakota. The Ponca made a 500 mile journey on foot to present day Oklahoma. 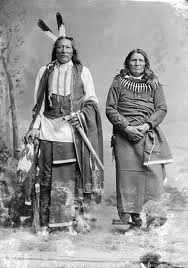 excerpt-"On May 16, 1877, blue-coated soldiers surrounded the village of 700 people. The soldiers drove the Ponca "as one would drive a herd of ponies" across the Niobrara. Howard kept a diary of the march south, a journey rife with suffering as the Ponca battled constant torrential rain, camped in mud, crossed swollen rivers, even endured a tornado. People broke down in cold, hunger and illness. Many died along the way. Among the dead were children weakened by exposure. "

In January of 1879 one of the Clan chiefs named Standing Bear fled from the new Oklahoma Territory with a small band of Ponca of about 30 members. Standing Bear had made a promise to his dying son that he would bury his son back in their original homelands if the young son succumbed to his illnesses. Against Government orders, Standing Bear and the small band headed back to Nebraska, only to be captured upon their arrival and put on trial. This began Trial of Standing Bear which became the first of its kind case of human rights court cases against the U.S. The Chief Clan Standing Bear won the court case and was allowed to remain in Nebraska with equal rights and being recognized as a human being and not a "savage indian." Although a small but unprecedented victory for its time, it came at a cost in which the Ponca Tribe was now split into two bands, one in Nebraska and one in Oklahoma. A bitter sweet victory on many levels for the ancestors at that time.