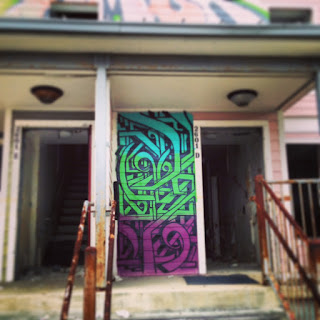 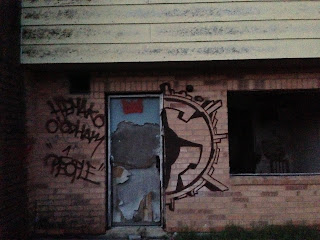 Recently returned from a 2 week visit to the city of New Orleans. Myself and artist Douglas Miles were flown out to paint 2 live murals and 1 black and white mural installation at the 2013 New Orleans Jazz & Heritage Festival.

A first time visit for myself , I was interested in the city knowing that it has a rich history of music and culture, and the Jazz Fest itself is legendary as it just past it 44th year this year. 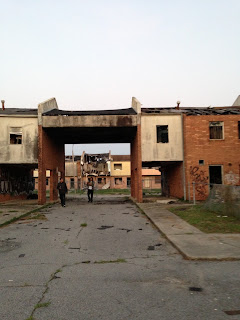 During the first couple of days, friend and local film maker Brandan Bmike Odums, took us on a journey to a section of the city known as Press Park. In New Orleans it's clear that are 4 main types of areas....the tourist French Quarter, the central business district, higher income white neighborhoods...and low income black neighborhoods. Everyone remembers the devastation of the 2005 hurricane that flooded some ¾ of the city if not more. Many homes and whole neighborhoods destroyed. Many different areas, lives and incomes were affected...but those higher income neighborhoods that were destroyed, seemed to be rebuilt (of course) right away, while areas in the 9th wards and other lower income parts of the city never got rebuilt.. . still holding sights of erie post apocalyptic homes with no windows, doors, furniture still intact, family photos still on the walls....and markers in spray paint on the outside from first responders in search of survivors. 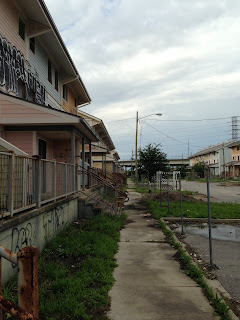 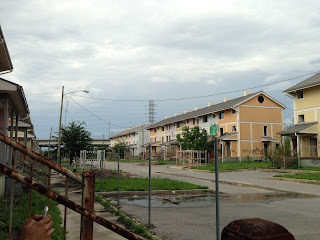 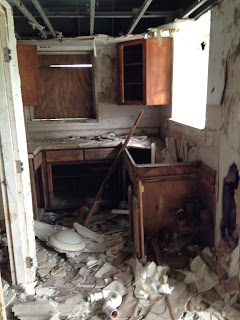 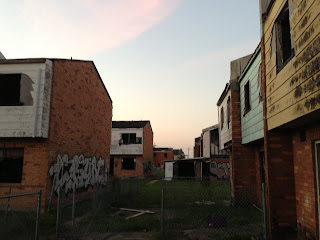 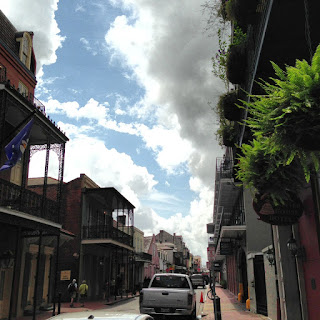 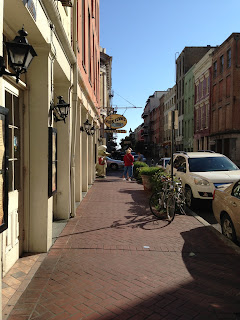 The famous French quarter area of the city is beautiful with awesome architecture giving it the very different feeling of being in another country. However charming it may be visually, I knew this was not the New Orleans that I wanted to experience by itself. A great place for tourists and photographs, but I was more interested in seeing areas that had been forgotten and getting to know real locals who could share their opinions and express their views from a side of the city that isn't the tourist area. 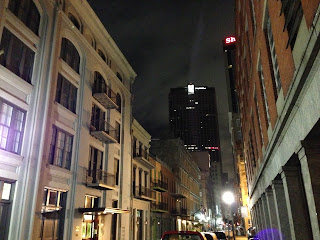 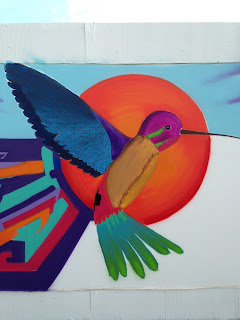 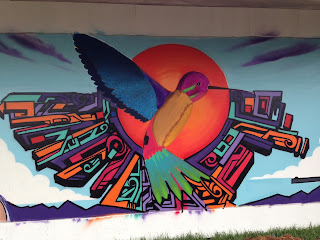 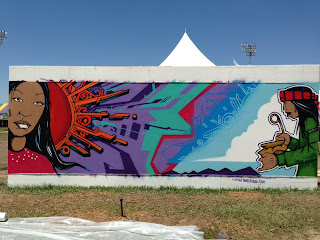 A new chapter of the traveling What Tribe art show was showcased in the Treme neighborhood which featured myself, Doug Miles, Sol Galeano, Chris Bunch and Brandan Bmike Odums. 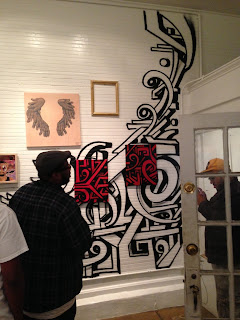 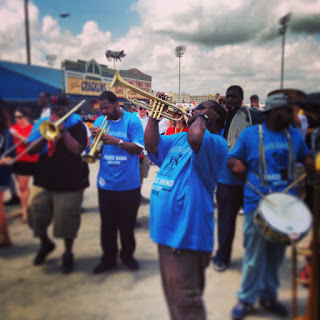 The power of music and creativity. Those unaware..the quick version..... Jazz and blues evolved out of African drumming played by slaves. From jazz and blues, came many of types of popular genres such as rock n roll, RNB, hip hop etc. the evolution and reinvention of a different type of weapon.....love. The love for music....The love for dance....celebration, ceremony, prayer, expression, physical communication, energy. Human beings always wants to find a way to connect with the physical realm and the metaphysical realm...because somewhere deep down there is a mystery inside each being that is trying to connect to a higher source. The higher source already lives inside all of us. The power to communicate with intellect, and the ability to recognize many layers and dimensions in time and space. We tend forget. However one of the great resources is the vibration of sound and the specific sound waves and melodies that seem to sync and harmonize with our brain. 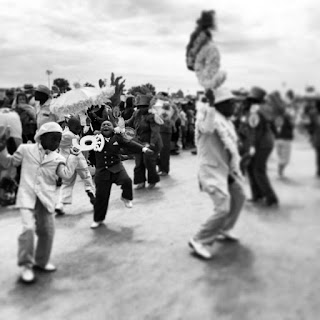 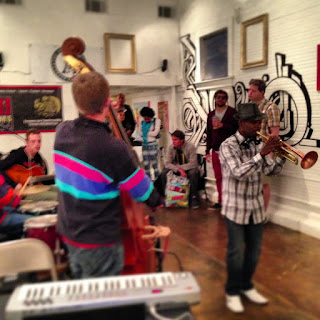 ...the thick energy of so much intense and great music fills the streets and the air. Bob Marley was right when he wrote the lyrics "once music hits you, you feel no pain". The hardships that the city of Nola has experienced and the layers of oppression.....one weapon that cures all is the power of music. Being on the streets of the quarter or inside the festival, you can see the resilience of a people and a city and the strong spiritual connections to brass band music. Walking brass bands and dancers dressed in the flyest suits and Sunday best....bound together by the energy of sound. The brass band transcends from African and European roots…and keeps many similarities with the evolved version. From what I could gather, the music is partly what helped the city get back on its feet. Carrying on old traditions. A spirit and connection that could never be broken through history...and not just in New Orleans but everywhere.

From our guest Lecture at a local art school..NOCCA. 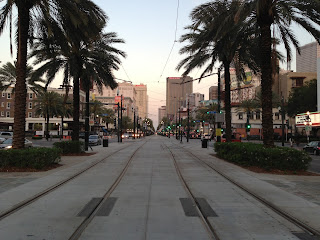 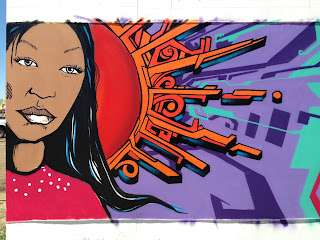 In the end....the overall trip was filled with meeting new friends. Large murals painted at the event…as well as Abandoned parts of the upper 9th were also painted. We were able to give a lecture at the New Orleans Center for Creative Arts. The lecture went quite well and the 50 or so young art students seemed be quite inspired with our shared experiences and stories. Young people everywhere need inspiration and direction. One evening during the trip we watched a screening of a local documentary titled Shell Shock. It was a look inside the gun violence in certain neighborhoods also touching on some intense statistics about incarceration of African Americans in the city of New Orleans. It also showed the young people from those same neighborhoods out to make a difference with determination to make change. It reassured me that reservation life has many parallels to other worlds outside the boundary of native communities. It also reassured me that change starts with education and raising the young generations with the knowledge, tools and resources that they need to not only just survive but to thrive and build a future as well as to carry on a legacy of greatness that all indigenous people everywhere have.

During our trip, We also ran into some familiar acquaintances such as Ethan from the band Tortured Soul, Jboogie, And Rich Medina. We also sat in a studio session with Mos Def and discussed the topic of music and the music industry.

As far as the festival goes… what a beast. But more importantly, what great people behind the scenes. Thanks Asia, Valerie and Rachel for having us. And thanks to the crew, Matthew, Gason, Scott, Laurita, Grayhawk, Lady Grayhawk. Peace to Grama Elder Elaine from Washington for having all of us crackin up...and also to Jimmy Price, Travis of KNOWLA, The Cody's, Photographer Alexa, Yves, Gus Bennett, Doug MacCash, WWOZ Radio, The secret paint spot, Double Black Cafe and everyone else who Im forgetting right now . 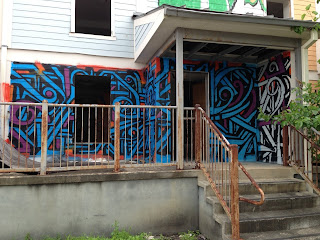 A Double shout out to our main man Bmike/ Brandan Odums for holding it down for us outside the Fest. Brandan does some great community work as well as a web series and collective known as 2Cent with his boy Kev. Follow them, find them on instagram, youtube etc...support these guys.

I feel like I'm forgetting more but for now that will have to do. I may have to come back later and add more.