Our most recent collaboration. Lalo and I created this piece on 2nd st and McKinley just north of downtown Phoenix. A wall that had an extensive history of graf and other work on it...was commissioned into a permanent mural after the owners of the new Angel's Trumpet Ale House (Matt and Sherry)gave the green light for this design. 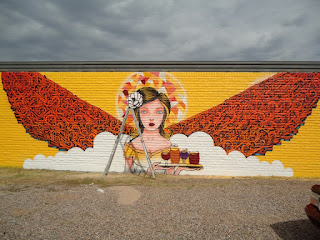 Lalo painted the girl serving the drinks as well as the clouds and faint cityscape...And I created the huge wing span that ate up way more paint than I expected. 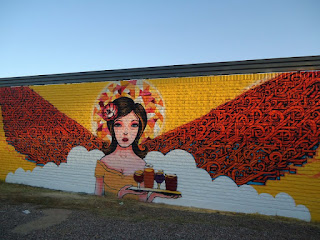 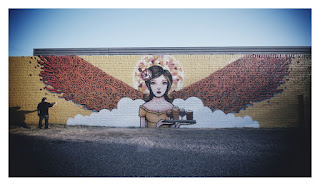 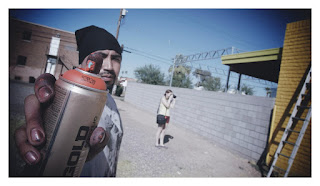 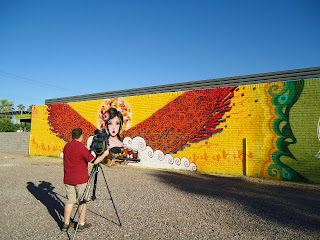 News 12 doing interviews with Lalo and myself. 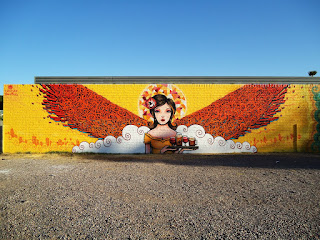 Finished. Not sure on the exact measurements but I believe its around 15 ft x 60 ft...give or take
Posted by Be-One at 3:11 PM 1 comment:

Been a busy month or so...trying to keep up on here. This was a recent project that myself and fellow Calle 16 artist Hugo Medina worked on together along with student volunteers on the ASU West campus. 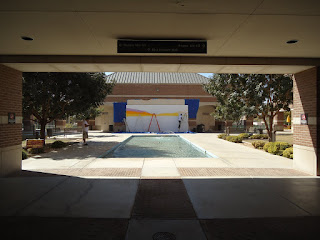 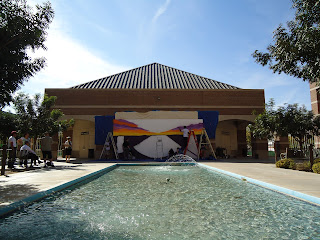 The actual canvas image size after being stretched is 11ft x 20ft. 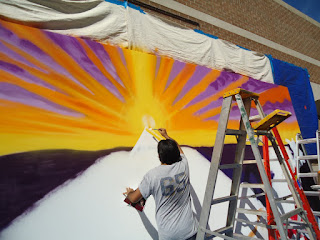 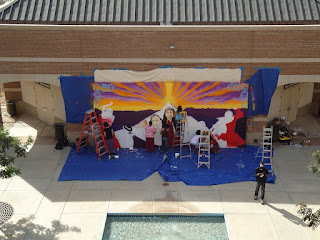 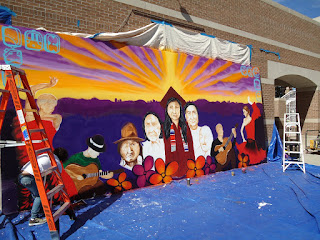 Last months project in Lac Du Flambeau inspired me enough to want to repeat the flower patterns as in the LDF mural. Hugo did all the portraits as well as Flamenco dancers and Guitar players. I brought in the Arizona sunset with the help of a film student who was eager to try aerosol. The turquoise Mayan hieroglyphics I felt would be fitting in the corners. 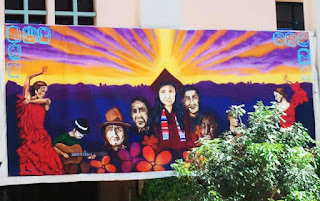 End result...a mural of diversity, inspiration and hope. Piece completed and hanging without the large stretcher bars.
Posted by Be-One at 2:54 PM No comments:

Thomas Greyeyes is a young Dine(Navajo) artist who recognizes his own creative purpose and is deeply rooted with his Dine culture. He often reflects his voice through his art on issues that affect not only the Dine but all Indigenous peoples and our struggles. Tom and his partner Grace Miles(San Carlos Apache) were arrested last year after doing an art installation in Flagstaff's town square in protest of the Snowbowl Ski resort to make fake snow on The San Francisco Peaks. (Brief description: Snowbowl Ski Resort in Flagstaff aims to utilize a deal in which they would use reclaimed(sewage) water from the city of Flagstaff in order to create fake snow upon the sacred peaks for recreation. It would not only be a desecration but a health hazard to the environment)

Protect the Peaks Art Installation from Tom GreyEyes on Vimeo.

This past week, a local(Phoenix) creative publication featured an article on the recent "Painted Desert Project" that myself, Thomas Greyeyes and several other international artists participated in over the summer up on the Navajo Reservation.

Unfortunately "they" failed to represent my friend Tom...not a single mention or even a photo of his work...And in my opinion Tom should have been the main one featured out of all the artists, because he is the only Dine(Navajo) artist who participated in the mural projects. 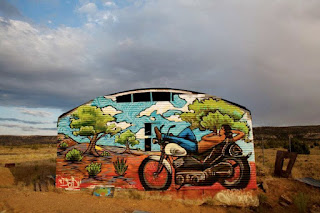 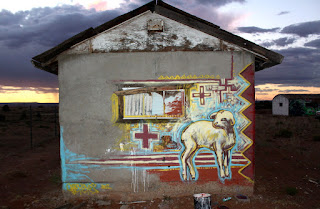 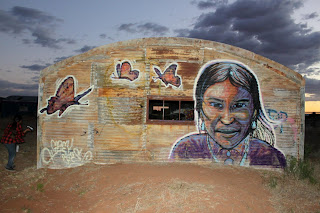 However...aside from this project(Whom Jetsonorama along with Yote organized)...The Navajo Nation has been a canvas for muralists and artists from the reservation for years. The infamous windmill water tanks(along with other structures) that are EVERYWHERE on all parts of the rez have been used as a platform for everything from Original art that reflects the culture of the Dine people, as well as being used as a form of media to advertise the voice of protest against Coal Mining and water contamination, to water rights and as well as the issue of Protecting sacred sites such as the Peaks in Flagstaff(which is a sacred site to the Dine and Hopi). 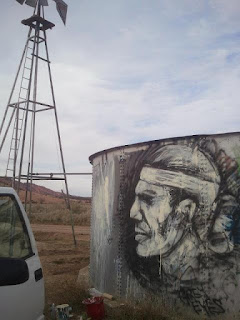 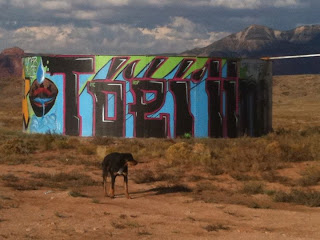 TO'EI'INNA(Water is life) and a rez dog. 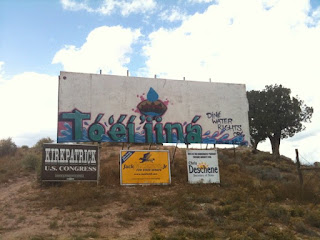 My frustration here is not just against the recent publication's failure to mention my friend Thomas...Its bigger than that. I notice how the art world(and the world in general) can be at times(superficial and egotistical). I see certain sites and blogs that only showcase a "who's popular" contest. I am all for more art in the world and even support and admire all the other artists who were involved in the Painted Desert Project...however there are so many great artists who go unnoticed for not only the quality and skill in their work, but more importantly the messages and deep rooted meanings in their work that they put out there.. which in many cases hold far more validity in relation to sociological issues and show strength and power through the philosophies and psychological factors that illuminate from their work.

The amount of Native artists who put in work is amazing but again often overlooked. It reminds me of the era of the late 70's and early 80's when Haring, Basquiat, and Warhol were the big names coming out of NYC...but names such as Dondi, Tracy 168, Taki 183, Stay High 149, Vulcan, Coco 144, Seen and so many more subway train writers...never got the recognition they deserved...and probably put in more hard work..blood, sweat and tears...than the first 3 mentioned.

This entry is me showing love to my fellow brother and artist Thomas Greyeyes... and the numerous other Native artists who represent harder than most...I could say so much more but instead.. At this time Id like to recognize some of those influential artists(Renegades of Funk)...

We recognize ourselves as human beings and our relation to this earth...therefore we carry on this legacy of creative intelligence through balance and continue our survival and place in this world... 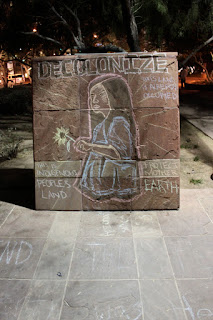 "Our Existence is Our Resistance"