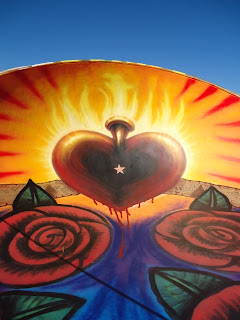 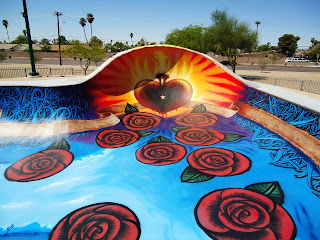 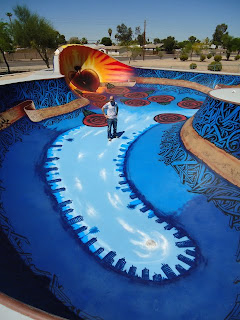 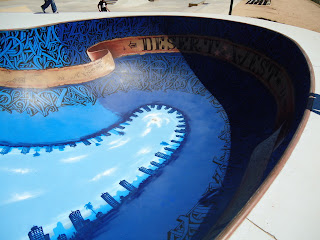 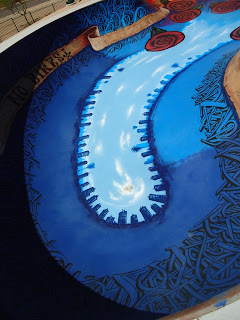 We were only able to complete about 75 percent of the piece before the PHX AM...
These were some shots of the skaters testing out the bowl 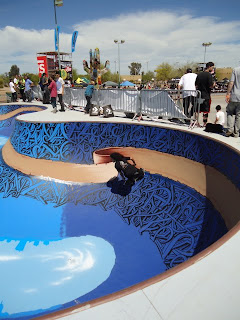 During the PHX AM 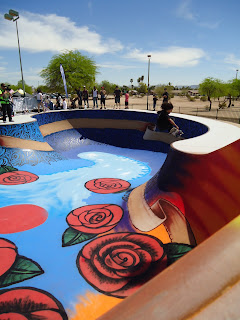 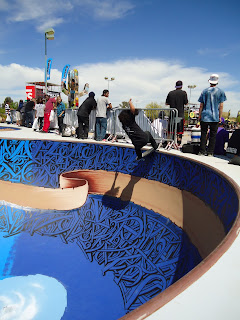 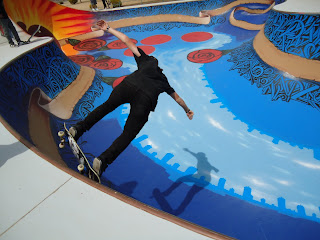 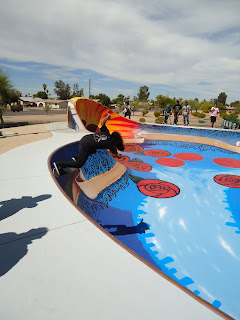 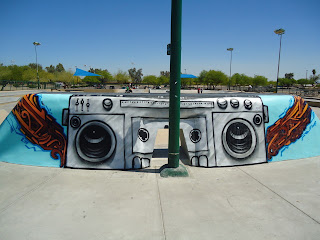 Boombox by Lalo. Wings by Breeze 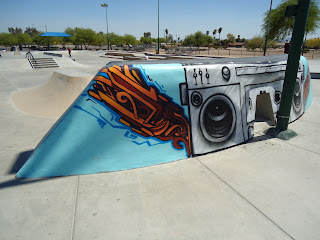 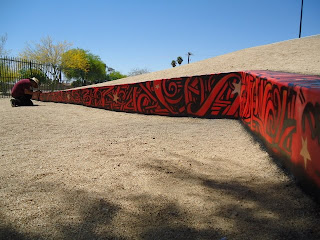 Even this little section of concrete got some love at the park.


The last week during March, Lalo and I started the "BOWL" at Desert West Skate Park in the Maryvale section of West Phoenix. That following weekend of April 2nd and 3rd was Cowtown Skateboards annual competition, The PHX AM. We were only able to complete about 3/4 of the bowl and had to take the weekend off for the Comp. I cant believe how hot it was ( 100 degrees +) during the event.

After the jam was over, we went back to work doing final touch ups and painting some additional art around the park. Funny that the following Sat, 1 week after the PHX AM, it was 50degrees and raining.

Overall, a very long couple weeks, but a good couple weeks as well. We got to know some of the local skaters and they couldn't have been more supportive, respectful, and thankful for the new addition that we not only did, but what the City of Phoenix and Cowtown added to the park as far as obstacles.

The skaters' names' who we got to know very well was a young man named Marcus, and an intense brother named Austin, who went by "Monkey".
Monkey had passed away a couple years back, and his ashes were poured inside the bowl's concrete while it was being built.
"Monkey loved skateboarding, it was his whole life" ...."Monkey was a BEAST! And very few could hang" -Desert West Locals x D.a.s.c
After hearing stories from some of the local crew, I could tell the park and Phx skate community lost someone special. I thought about him and the tales I heard while I was painting. SKATE IN PEACE "MONKEY" D.A.S.C.!!!

In the end it was nice to be back on the good ol WEST SIDE.

Special Thanks to Cowtown Skateboards, the City of Phoenix, Desert West Park, the PHX AM and all the local skaters at the "Dirty West"